The 2022 Wings Over Colombus Airshow

The 2022 Wings Over Columbus Airshow was an event both ambitious in scope and excellent in execution.  It was ambitious in scope because it featured so many major league performers such as the United States Air Force Thunderbirds, the Aeroshell Aerobatic Team, Rob Holland, a P-51D demonstration flight by Mark Henley, and a U.S. Air Force A-10 Thunderbolt Demonstration Flight, to name a few.  Not only were the performers of top caliber, but the airshow provided a vast array of aircraft on static display that were truly remarkable including a DC-3 manufactured in 1937, that in years past was operated by American Airlines and carried the moniker “Flagship Detroit.” We will review the activities at the Wings Over Columbus Airshow in the text which follows.

An Exciting and Ambitious Event

After setting a weather briefing the evening before and the morning of the flight, I dropped by the office to conclude an aircraft closing before making my way to Falcon Field.  Driving to Falcon Field, I picked up my IFR clearance.  I gave the Kate a quick pre-flight, loaded my gear and got underway with relative dispatch.  At the time of my arrival, Peter Hague and Andy Anderson were departing in the SBD Dauntless, and Stan Musik was departing in the CAF Corsair.  My IFR clearance was relatively straight forward, that is, to climb and maintain 4,000, radar vectors to the HEFIN Intersection then direct to the DEGAA Intersection then direct to KCBM (Columbus Air Force Base).  The flight to Columbus was relatively routine except there was moderate turbulence and a strong headwind. Upon landing on Runway 31 Center, there was a strong crosswind from the west which made the landing interesting.  After taxiing inbound and shutting down, I was met by a young air force pilot with the call sign “Fredo.”  Fredo helped me with my gear, directed me to Base Operations, and in no time at all, I was in a rental car heading for the hotel which was about 30 minutes from the base.  I met Peter, Andy and Stan for dinner, then turned in early since Friday would be a practice day. 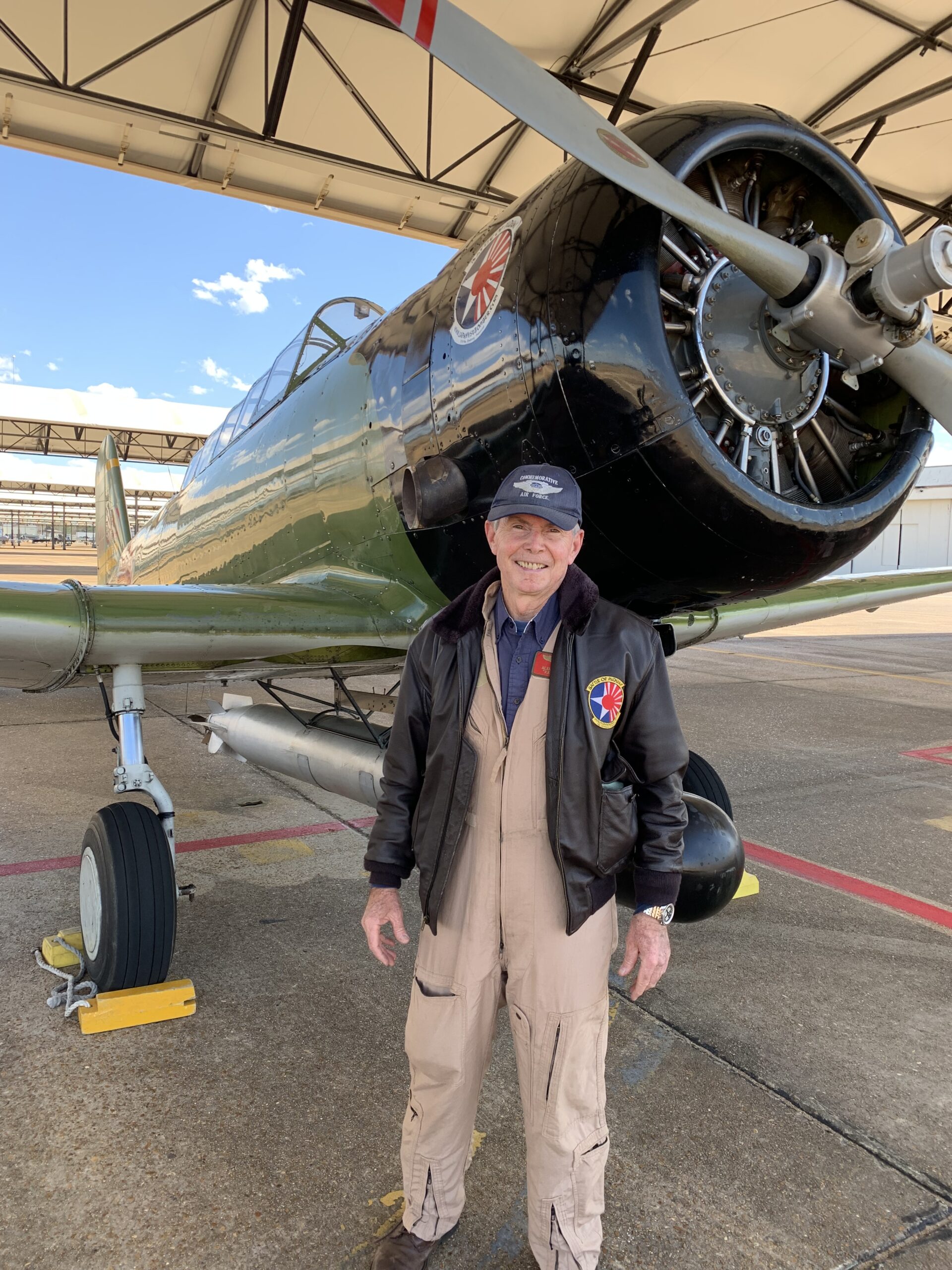 After catching a quick breakfast at the hotel, we arrived in the base for the briefing by Dave Schultz at 8:30.  Dave is a real professional in the airshow industry.  His briefing was thorough and covered all the contingencies both operationally and in terms of emergencies. Stan and I would perform the Kate versus Corsair Dogfight at about 4:30 p.m. on Friday, but we were to fly just after 1:30 p.m., on Saturday and Sunday.  The wind was almost straight down the runway on Saturday.  Peter Hague agreed to fly in the backseat of my Kate with the permission of the FAA.  Despite two communication checks in the Kate before engine start, I had a communication failure after engine start.  Peter Hague and I swapped helmets so that I could communicate with the Air Boss and accomplish the flight on Friday afternoon.  There were no pyrotechnics during the practice session on Friday, but we flew the flight as though there were.  The result was I made radio calls inbound for passes where there would be explosives stating “hot pass.”.  After our performance on Friday, we debriefed, and covered the initial lost communication issue on the beginning of the flight, and the need to fly a tighter pattern for the performance on Saturday. 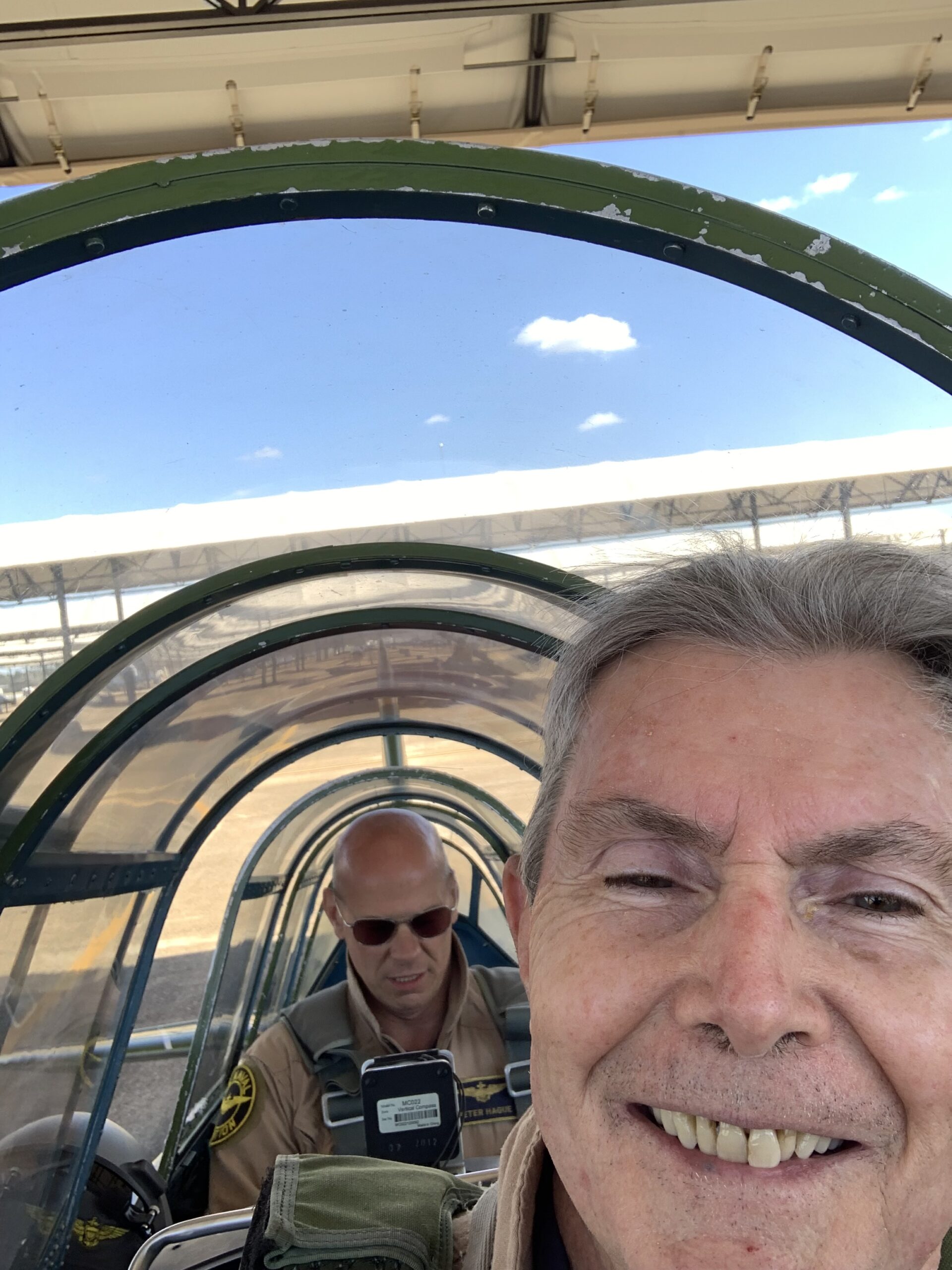 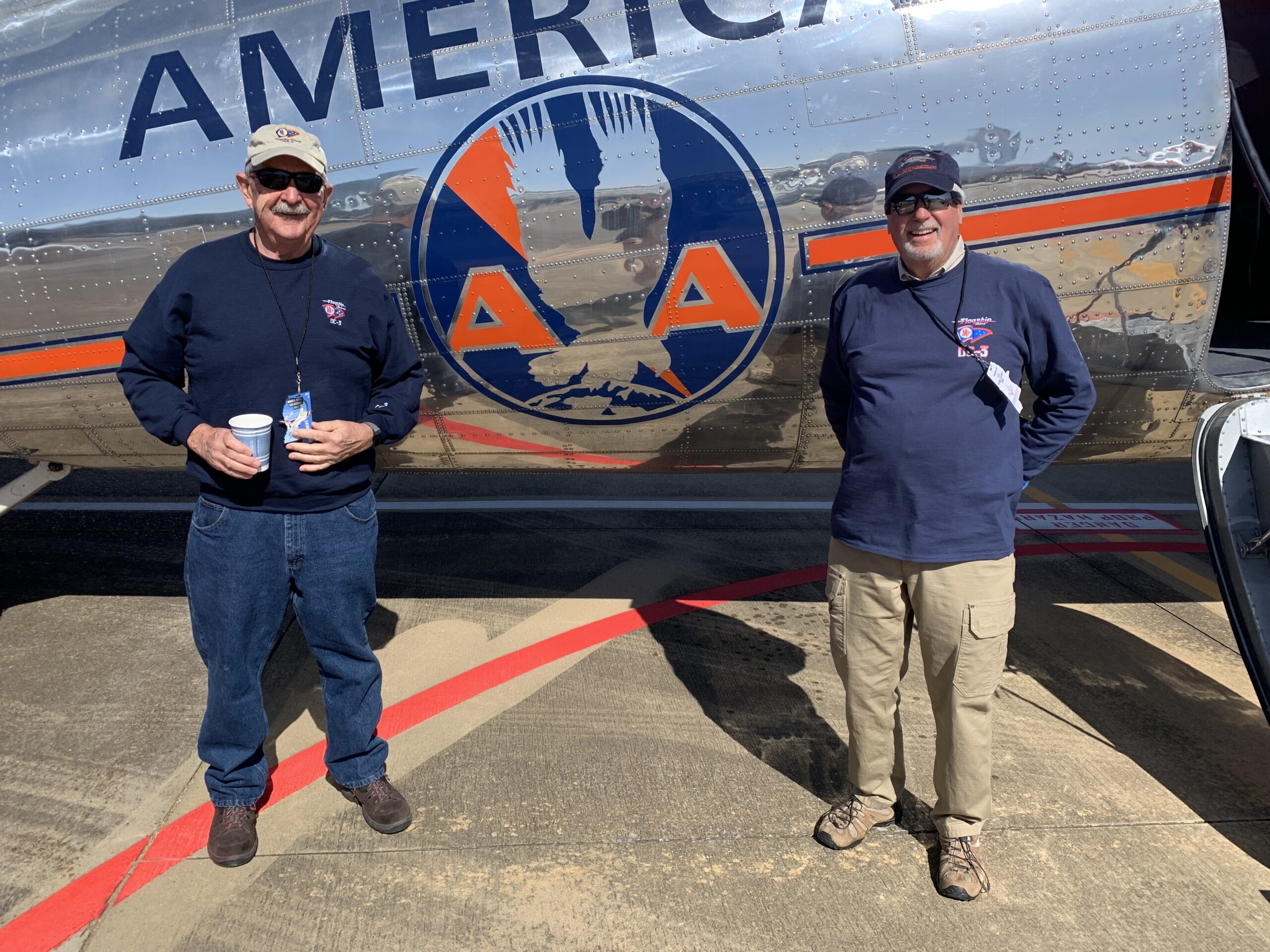 The briefing given by Dave Schultz on Saturday morning was once again thorough, concise and to the point.  Recognition was given to Air Force personnel who were responsible for producing the air show.  As mentioned earlier, there was a change in our flight sequence and the schedule, since we would perform shortly after lunch.  The wind was once again out of the west northwest providing a left crosswind.  Rather than the air start Stan and I had on Friday, Saturday would be a ground start.  The Corsair took off first followed by the Kate.  I made four hot passes with pyrotechnics, and on the fifth pass I was shot down by Corsair.  Then Stan went into his aerobatic routine.  At the conclusion of the flight on Saturday, the debrief consisted of “I have no comments.”  One thing that was interesting on Saturday evening was a Douglas DC-3 aircraft on display in American Airlines colors.  This aircraft carried the moniker on its nose “Flagship Detroit.”  During the course of the airshow, I came to befriend George Dennis, a retired American Airlines captain who is the driving force behind the foundation that operates the DC-3 aircraft.  Built in 1937, the DC-3 is a spectacular and remarkable aircraft.  The aluminum skin is polished and looks like a mirror, just like an airplane entering service in 1937 would have looked.  More information on this aircraft can be obtained at www.flagshipdetroit.org. 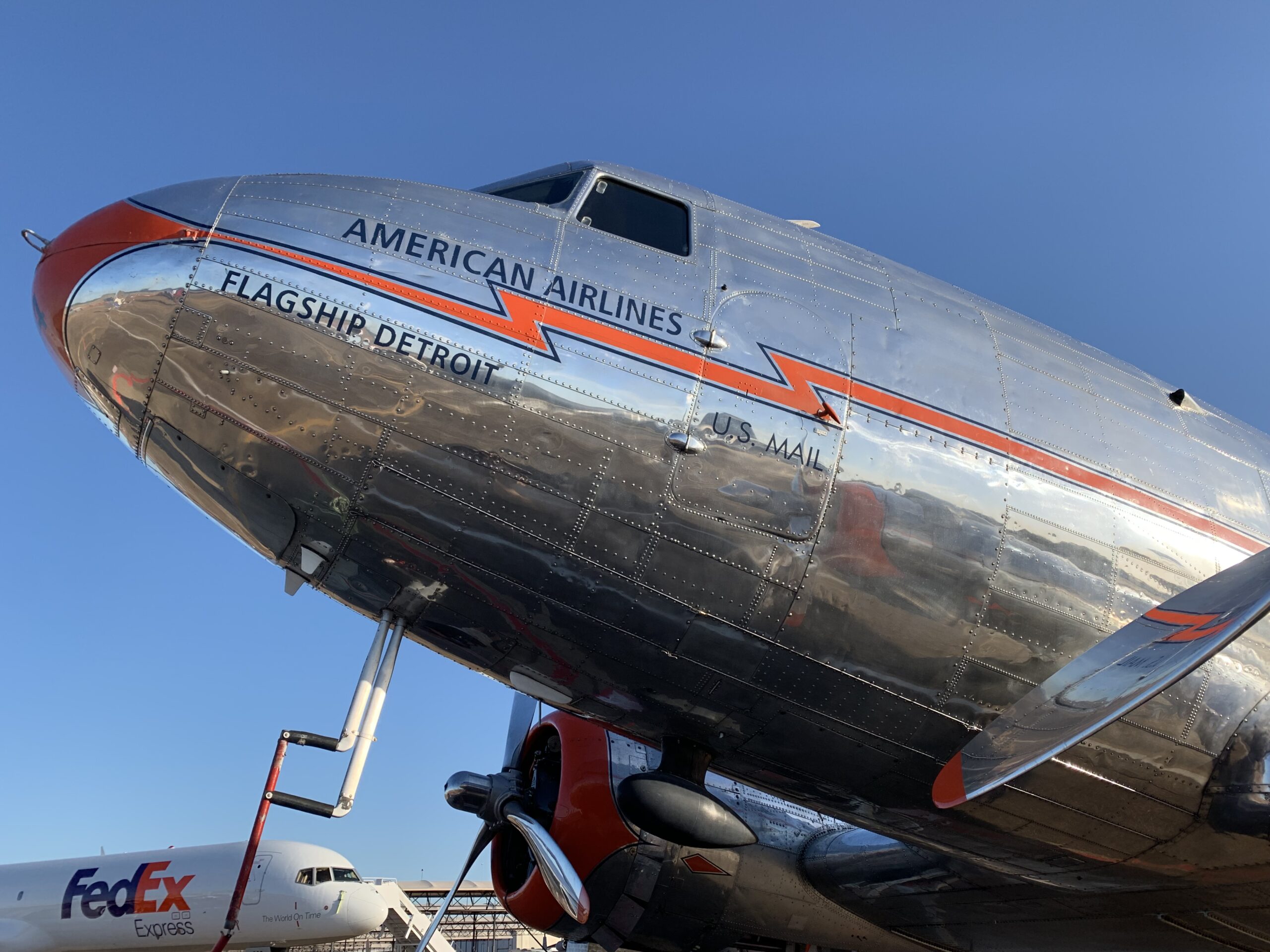 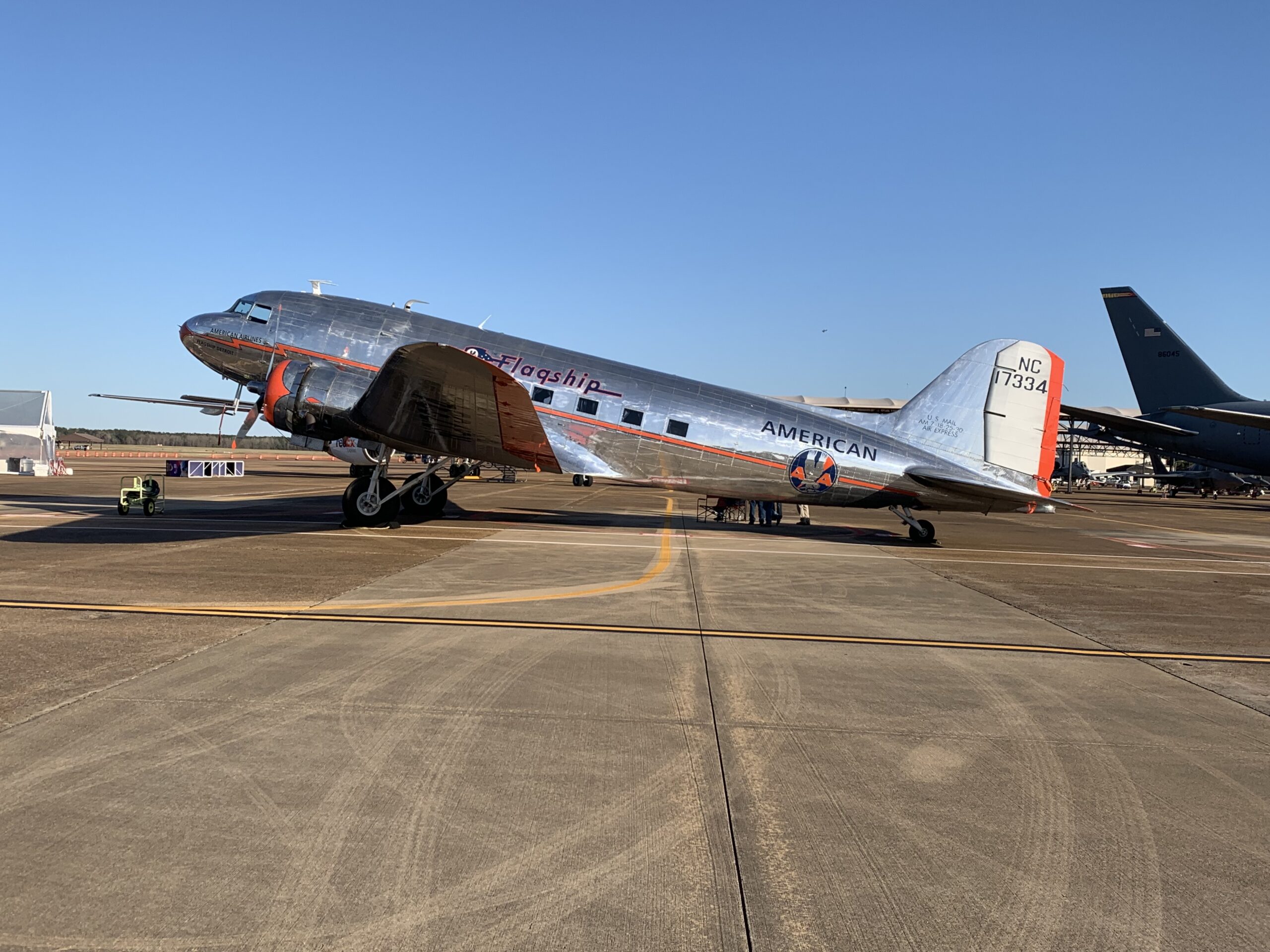 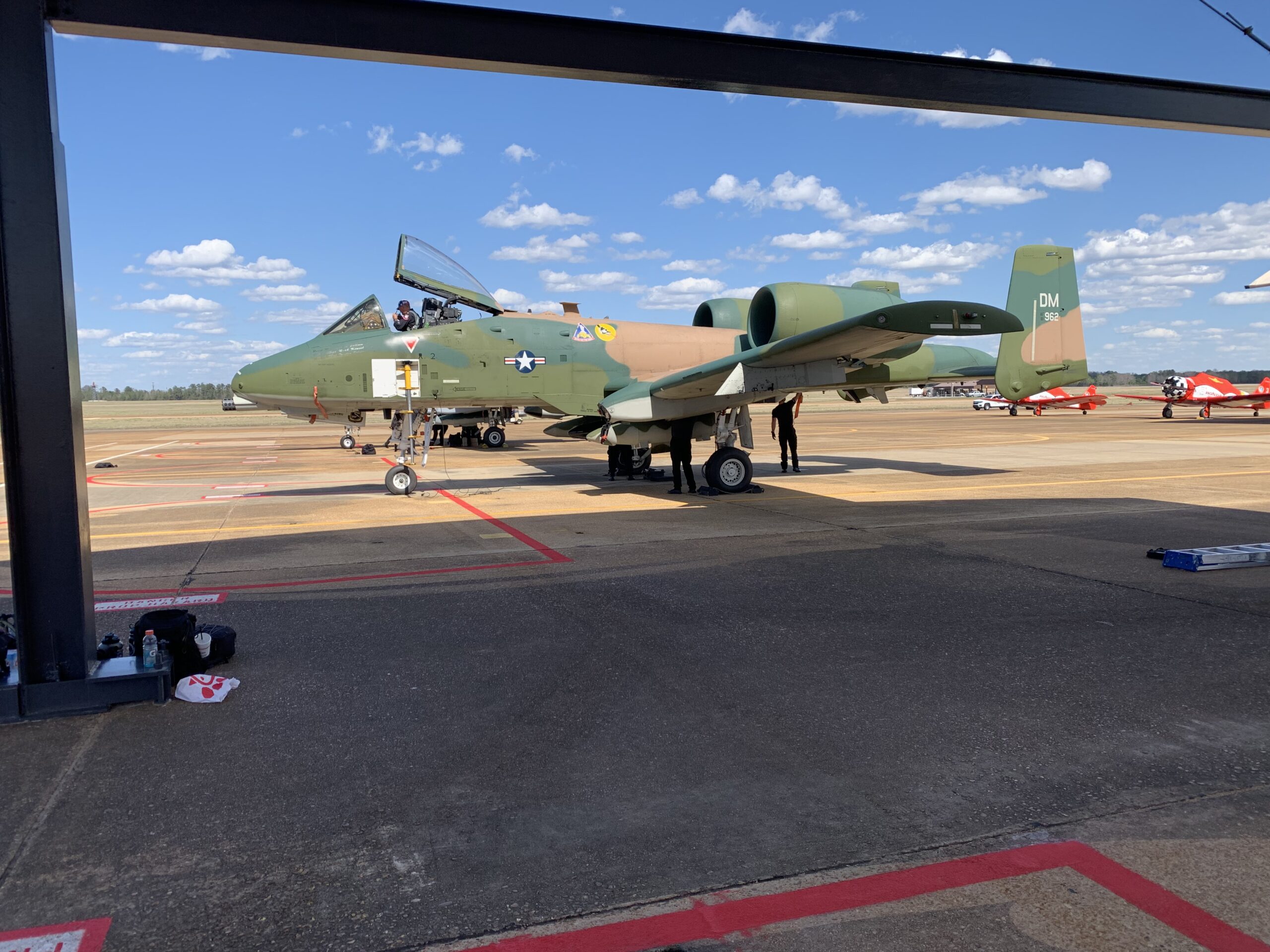 The Sunday morning briefing was consistent with the previous briefings with the exception of the fact that there was recognition given to our pyrotechnic coordinator with the call sign “Dynamite.”  There had been a grass fire on the airport following the pyrotechnics on Saturday, and this required fire department personnel to extinguish the fire before Stan and I could perform our routine with pyrotechnics.  The timely response of the fire department personnel to this grass fire was recognized during the briefing.

Our performance on Sunday was complicated by the fact that we once again had a substantial ground fire following pyrotechnics of the act that preceded us. This meant that we would not have pyrotechnics during our act.  Consequently, we were delayed in our departure while efforts were made to extinguish the grass fire.  We also departed from Runway 31 Right as opposed to 31 Center to accommodate landing traffic which was an A-10 and a P-51 Mustang that were the act before us.  By this time, the Kate was cleared for departure first, followed by the Corsair.  As I climbed out to the right and turned inbound from my diving turn, the Corsair was beneath me and was called out by the air boss.

After five passes on the target, the Kate displayed a plume of smoke and the air boss handed me off to Columbus Departure for my trip back to Atlanta.  This trip was made VFR to avoid the complications of having to pick up an IFR clearance following an air show performance.  The flight home was uneventful.  The flight home took just under an hour and thirty minutes and consumed less than 50 gallons of fuel.  It was a beautiful spring day, and I took a number of photographs of the flight home.

Reflections on the Columbus Air Force Base Show

I never cease to be impressed by the men and women serving in our armed forces.  They are very dedicated and bright people with a form of a very high level of competence.  This is true for the pilots, the navigators and all the ground personnel that I encountered. The morale and Columbus Air Force Base was very high.  The grounds were immaculate.  The aircraft appeared to be in pristine condition.  The Base Operations building was spotless.  The airshow was very well run on all levels.  It was my privilege to fly in the 2022 Wings Over Columbus Airshow. 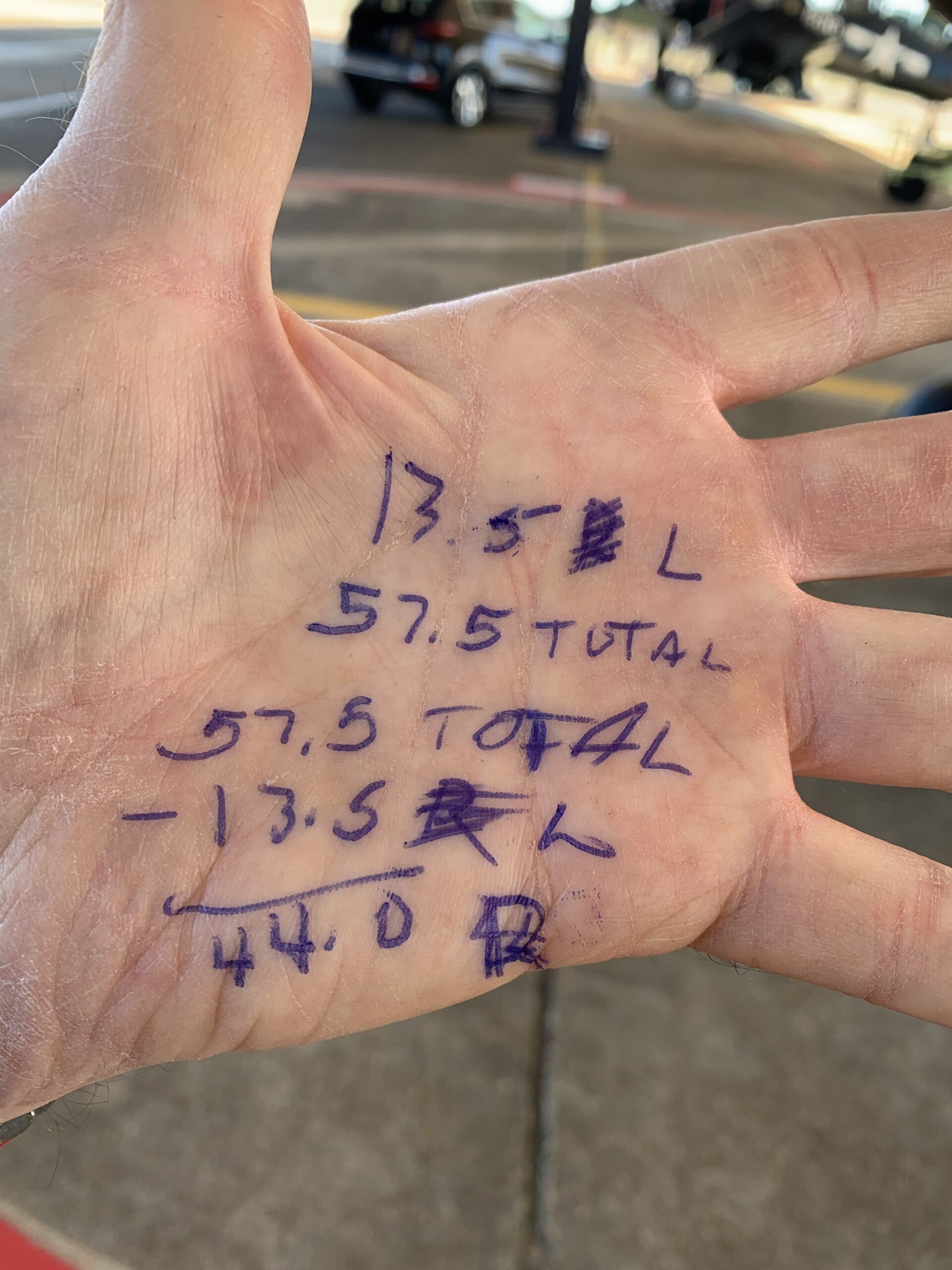